Ivana Nikolić was born in 1991, in Vareš, Bosnia and Herzegovina, as a middle child in a family of non musicians. She has started her musical education on the encouragement of her older sister, who already was learning to play the violin. At the age of seven she first started to play the violin, like her sister, but four years later she switched to oboe, which gave her a unique voice and in which she found her true love.

Stjepan Vitez, in Varaždin School of Music, was her first oboe teacher in Croatia, since her family fled Bosnia due to the Yugoslav war. After learning the oboe for five years only, she won a place at the Zagreb Music Academy in the class of prof. Branko Mihanović. In the same year she got invited to study in Vienna with the renowned Israeli oboist Guy Porat at the Musik und Kunst Privatuniversität der Stadt Wien. In his class, she finished her bachelor degree, worked as well with prof. Michael Werba (Vienna Philharmonic) and continued with the masters at the KUG Graz in the class of a wonderful and diverse Australian oboist Emma Black. After obtaining her masters degree she decided to pursue another one - in chamber music - at the famous MDW Vienna. She is currently at the end of her studies in the class of prof. Gottfried Pokorny and Harald Hörth (Tonkünstler Niederösterreich; Vienna Philharmonic Orchestra) as well as members of Klangforum Wien. 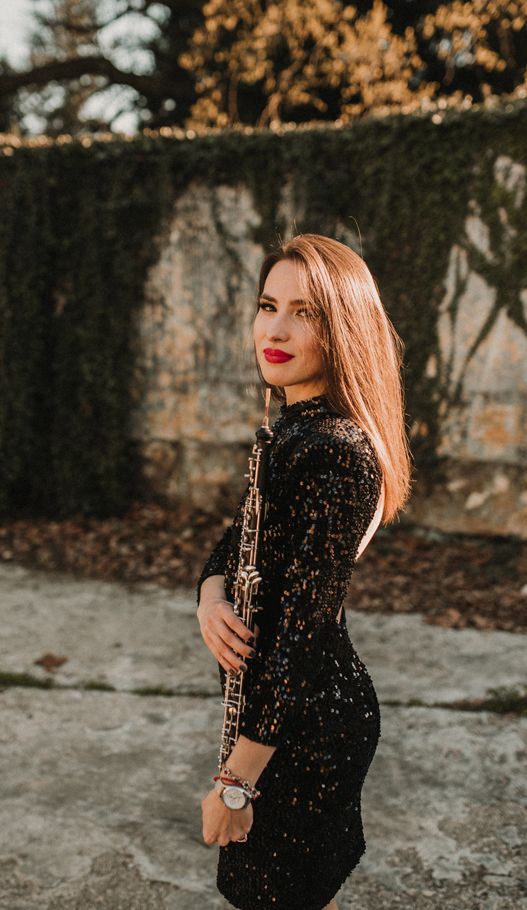 She participated in various masterclasses, as an addition to her studies, with world renowned artists such as Maurice Bourgue, Hansjörg Schellenberger, Ingo Goritzki, Clara Dent, Guy Porat, Sandro Caldini, Sergio Azzolini, Dario Golcic, Andreas Helm, Maja Kojc, Christian Wetzel und Irmgard AAnderl-Krajter. During her studies she won a number of prizes as well: twice she was a laureate of the Croatian national competition as an oboe soloist (2006 & 2008) and solo oboist in the orchestra (2007 & 2009). In 2008 she was a semi finalist of the Croatian selection for the Eurovision competition. In 2012 she won a LIONS CLUB scholarship for the Hamburg Masterclasses and in 2017/2018 a scholarship of the MDW Vienna.

She was a solo oboist of both MUK and KUG orchestras, Junge Philharmonie Wien, Orpheus Orchester Wien, Pro Arte Orchestra Vienna. and is currently working as a solo oboist of the WISE: Wien International Soloists Ensemble, Viennto Quintet and The New Symphony Vienna. She performed at the prestigious halls around Europe, but most notably in the Viennese halls of Musikverein and Konzerthaus, as well as Graz Musikverein, under conductors Marc Poillet, Lorenzo Viotti, Johannes Wildner, Mark Stringer and others.

With the WISE Ensemble she is leading an engaging chamber music cycle in the Bank Austria Salon of the old Vienna City Hall and is an oboist in residence of the Vareš Classic Festival since its founding in 2013. In 2014 together with her sister Andrea Nikolić she premiered a piece "Where will it end", written for them by the Slovenian composer Iztok Kocen, which they also are recording on a CD this year.

Since 2018 she is an oboe and music professor at the Musisches Zentrum Wien and Beethoven Musikschule Mödling. Marigaux oboe being her instrument of choice, she enjoys sharing the knowledge of the contemporary oboe interpretation.

Keep up with my music, events and shows